The Fairs of St. Lawrence County

One Hundred and Fifty years ago several villages in St. Lawrence County held annual fairs. The villages were very rural, agriculturally based, and had limited modes of transportation, the fair was often the highlight of the year. This was the time to show off that steer, horse, or pig. It was bragging rights time. Who would win the blue ribbon and get to boast about having the best horse for the next whole year?   Whose wife would bake the best pie or sew the best dress? All of these questions were heavily debated and the competition was serious and intense.

Among those villages holding fairs were Ogdensburg, Canton, Gouverneur, and Potsdam.  Canton, being the County Seat, sought and received a charter declaring them the St. Lawrence County Fair in 1851.

Ebenezer Miner (Miner St.,Canton) was one of several founders of the St. Lawrence County Fair held in the village of Canton. The purposes of the fair being to display agricultural exhibits such as horses, oxen, cattle, poultry, and swine. The animals were usually displayed by the men in the family, while the women competed in the sewing and cooking related events.

The fairgrounds in the village of Canton were located adjacent to what is now Riverside Drive and Fairway Lane. Much of the property was in back of what is now Canton Central School. The old fairgrounds are now occupied by housing laid out surprisingly enough in an oval, the same shape as the original racetrack. The Fair was always in mid-September and was like Christmas and Fourth of July, big dates on the Canton calendar. 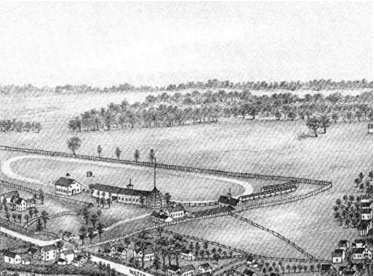 Other than agricultural competition, the main purpose behind all of these fairs was entertainment. Remember that people one hundred fifty years ago had limited travel capabilities and very little entertainment outside the home. As was typical of these village fairs, the first thing to be built was a race track. People have always loved their racing. Today it may be cars, but back then it was horses and sometimes bicycles. Horse racing, both saddled and harness racing was the epitome of excitement and competition among the townspeople. Often betting would occur and sometimes fights would break out, the competition was so fierce. There were also baseball games between neighboring communities that were hotly contested.

Encouraged by a profit of several hundred dollars the first year of operation, many village elders gathered and contributed or solicited money to begin a serious building project to enhance the fairgrounds. The first thing to be built after the actual racetrack was a ticket booth. Next came a shed basically that housed agricultural exhibits and also served as a bleachers of sort to watch the horse racing. As their success and profits grew, the fair board added sheds for the livestock and quite an elaborate octagonal floral hall for the ladies to exhibit their flowers and hold their meetings. A better grandstand was constructed that would hold the hundreds of people that would come to watch the racing and other entertainment. At the time there were traveling trapeze acts, tight wire walkers, jugglers, and magicians that would thrill the fairgoers for ticket prices ranging from ten to twenty five cents. 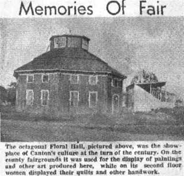 Canton people were rightfully proud of their fair as it continued to generally prosper during the next few decades of the 1800’s. Generally prosper is an apt term, because these rural fairs were very dependent (and still are) on the weather. Most fairs were three or four day events. A three or four day rain during fair week would essentially ruin the event and the fair would lose money for that year.

The St. Lawrence County Fair flourished however, in those early years at least. The fair board claimed to be the largest and most successful fair in New York State, taking a second only to the New York State Fair held then in Albany. And they were successful too. There were hundreds of cattle and other livestock exhibited. Rural people took a lot of pride in their animals and this was the place to show them off and they looked forward to it all year.

The following article appeared in the local paper in 1889: 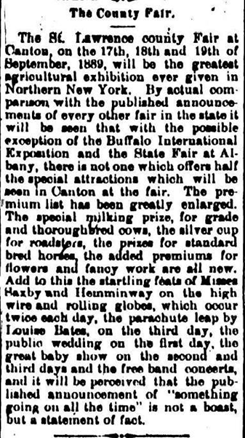 A few bad years, some because of poor weather, but also several fires, World War I, and the depression, caused the County Fair to sustain heavy losses from which they would not recover. Yet, through it all, they were proud to have never cancelled the St. Lawrence County Fair. After a particularly hard year in 1933, they decided to approach the Gouverneur Fair (actually named the Gouverneur Agricultural & Mechanical Society) about a possible merger.

In 1934, the deal was made and the St. Lawrence County Fair would merge with the Gouverneur Agricultural & Mechanical Society to combine their fairs at the Gouverneur location.

The first fair in Gouverneur was held in 1859, eight years after Canton held its St. Lawrence County Fair. With that name already taken, the founders decided to call itself the Gouverneur Agricultural and Mechanical Society. Gouverneur Fair is a shortened version of its official name. New Directors drafted a Constitution and By-Laws, that although amended, basically are still in effect today. Henry H. Haile (Hailesboro) was elected the first President of the Gouverneur Fair.

The first fairgrounds was located just North of Main St. and covered an area which is now from Park Street, Gordon Street and all the way to Rock Island Street and back to what was called the “gulf” , probably a ditch or creek that is still there today. Like the Canton Fair, the first thing to be built was the race track followed by a ticket booth. Early on there were no buildings, so tents were erected to house animals and household exhibits. There is a story that the St. Lawrence Fair Society had a tent and someone went to Canton at an expense of $2.10 to secure loan of the tent which was granted. The bill for shipping the tent to Gouverneur by train freight was $1.05 and it cost $0.25 to have it carted from the rail station to the fairgrounds. The first fair was held September 1, 1859 and lasted three days. It was reported that “town & county flocked to witness the spectacle”. Sleek cattle and carefully groomed horses vied for popular attention.

The current site was purchased in 1866 by Albert M Barney (Barney St. in Gouverneur) from Benjamin H. Smith (Smith St.) for $2500. It was divided into 10 shares and sold to 10 prominent businessmen and farmers. Year by year as the Gouverneur Agricultural & Mechanical Society was able; it bought back the shares to take ownership of the land. Part of the fair used to be where the Dean & Dolan portion of the high school now sits.

A ticket office was built where the current fair office now stands, and a racetrack was built with homemade bleachers for people to watch the races. As the fair prospered, buildings such as the floral hall, livestock housing, and a better grandstand were added.

By 1866 there were as many as 300 head of cattle entered in the various competitions. Most of these were Ayrshire dairy cattle. At the time St. Lawrence County had more Ayrshire cattle than anywhere else in the U.S. 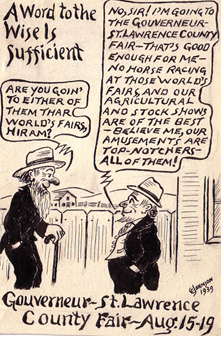 One of the main drawing cards in the 1880’s was the addition of the electric light. The story goes that the first lighting was provided by the Corbine Implement Company located down by the Main St. Bridge. Wires were strung on makeshift poles and through the trees to light the racetrack for night horse races. The lights were not very bright apparently, because the crowd would lose sight of the horses as they raced around the back side of the track, only to pick them up again as they neared the grandstand.

Throughout the years the Gouverneur Fair has had its ups and downs. Buildings have been burned down and torn down with new ones to take their place. The continual threat of poor weather has a huge effect on the success and any profits for that year. All of the North County Fairs basically have one week, or part of a week, to make profits sufficient enough to pay the bill for an entire year. Today we are much more mobile of course, and there are so many technological advances and things to do with our recreational time that rural fairs all find it increasingly difficult to attract patrons.

The Gouverneur Fair has enjoyed a long standing partnership with the Gouverneur School District. Portions of the original Barney St. property have been given or leased to the school that include the entire Dean/Dolan and High School additions plus the parking lots at both ends of the school. The school also leases at no cost the athletic fields and the newly renovated running track. In return, the school provides significant mowing of fair property and assists with the general upkeep of the grounds.

Perhaps no other individual is more synonymous with the history of the Gouverneur Fair than one Bligh A. Dodds. Mr. Dodds served the fair for forty seven (47) years in various capacities. He was Secretary from 1924 to 1971, and was President from 1957 to 1971. He was a tireless worker and promoter of the fair and could be seen by his distinctive straw hat that he wore at fairtime.   He was serving and very active in the merger arrangements between the St. Lawrence County Fair and the Gouverneur Fair in 1934. 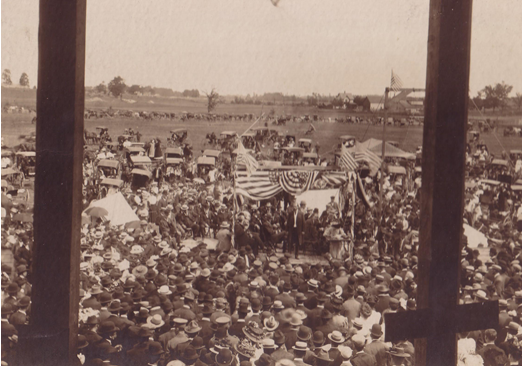 This very early photo taken from the grandstand was probably shortly after turn of the century. A close look shows some “horseless carriages” back of the stage. 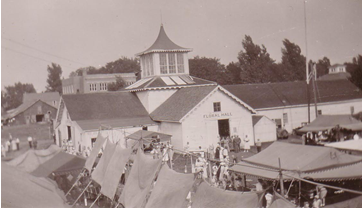 Floral Hall sits near where the high school parking lot is now.

As we have noted, the merger between the two fairs took place in 1934 but not without considerable legal procedures being accomplished. The New York State Department of Agr. & Markets needed to approve the arrangement which was eventually granted. There were many meetings and many resolutions passed as to the actual details of the merger.